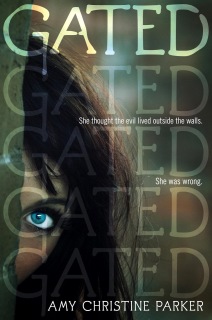 Book Title: Gated
Author: Amy Christine Parker
Published Date: August 6th, 2013
Published By: Random House Books for Young Readers
Genre: YA/Mystery
Standalone
Book Link: Goodreads
Purchase Link: Amazon, Barnes & Noble
Synopsis from Goodreads:
Do the gates keep the unchosen out or the chosen in?In Mandrodage Meadows, life seems perfect. The members of this isolated suburban community have thrived under Pioneer, the charismatic leader who saved them from their sad, damaged lives. Lyla Hamilton and her parents are original members of the flock. They moved here following the 9/11 terrorist attacks, looking to escape the evil in the world. Now seventeen, Lyla knows certain facts are not to be questioned:Pioneer is her leader.Will is her Intended.The end of the world is near.Like Noah before him, Pioneer has been told of the imminent destruction of humanity. He says his chosen must arm themselves to fight off the unchosen people, who will surely seek refuge in the compound’s underground fortress–the Silo.Lyla loves her family and friends, but given the choice, she prefers painting to target practice. And lately she’d rather think about a certain boy outside the compound than plan for married life in the Silo with Will. But with the end of days drawing near, she will have to pick up a gun, take a side, and let everyone know where she stands.
Disclaimer: This book was a personal purchase.
Review:
I have always had such a fascination with cults. The idea that one person is a leader and he has followers,in this case called his flock,is so interesting to me. The idea that these people so blindly follow him without even questioning him at all is simply mind boggling to me. These people in these cults are essentially brainwashed much like the followers of major cult leader Warren Jeffs, were.
These cults seem to recruit certain types of people. People who have experienced significant heartache,like the death of a child or the death of a parent.Or even people who are poor or unmarried. Those types of people are the ones least likely to question the leader, in this case his name was Pioneer. The cults tend to stray away from recruiting people who are more confident and strong minded.
Lyla’s family experienced a nightmare when her sister Karen disappeared ten years earlier when Lyla was only 5. 2 years later Pioneer recruited Lyla and her parents to be the beginnings of his flock that would reside in the Community.Ten years later Lyla remembers little of her old life as she has assimilated into her life in the Community.Will is her future husband, no one questions that. They have been intended for each other since Lyla was fourteen years old.
Yet this isn’t your typical cult as it is not driven by religion.It is what is known as a doomsday cult. Pioneer believes that the end of the world is near and he is making sure that once it does end, the entire Community can live in the Silo where they will be safe. But a chance meeting between Lyla and an Outsider by the name of Cody, threatens to unearth everything that Lyla has held dear to her. Suddenly the quiet Lyla is questioning everything about the Community and about Pioneer. That way of thinking could cost her, her life as well as the lives of those she loves.
The last third of the book is so heartbreaking and I had tissues in my hands during the ending of it. By the end of the book, my tissues were in shreds and my eyes were red and puffy. Amy Christine Parker did an amazing job with this book.I will definitely buy anything else she writes as this was a spectacular debut. 5 stars to this compelling, riveting and heartbreaking book that broke the formula of books about cults.