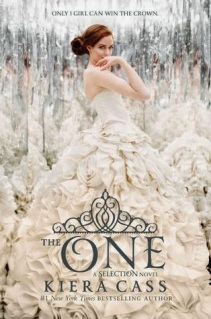 Book Title: The One (The Selection #3)
Author: Kiera Cass
Publish Date: May 6th, 2014
Publisher: HarperTeen
Genre: YA/Dystopian/Romance
Series: Book 3 in The Selection Trilogy (My reviews of Book 1 & Book 2)
Book Link: Goodreads
Purchase Links: Amazon, Barnes & Noble, The Book Depository
Synopsis from Goodreads:
The highly anticipated third book in Kiera Cass’s #1 New York Timesbestselling Selection series, The One will captivate readers who love dystopian YA fiction and fairy tales. The One is perfect for the fans who have followed America’s whirlwind romance since it began—and a swoon-worthy read for teens who have devoured Veronica Roth’s Divergent, Ally Condie’s Matched, or Lauren Oliver’s Delirium.The Selection changed America Singer’s life in ways she never could have imagined. Since she entered the competition to become the next princess of Illéa, America has struggled with her feelings for her first love, Aspen—and her growing attraction to Prince Maxon. Now she’s made her choice . . . and she’s prepared to fight for the future she wants.Find out who America will choose in The One, the enchanting, beautifully romantic third book in the Selection series.
Disclaimer: This was a personal purchase.
Review:
It’s been no secret that I’ve been obsessed with this series since I first started it in March. It’s addicting like chocolate. Except chocolate doesn’t make you wait for three books to see what happens and who is the last one left standing.
This book was the best book of the series for multiple reasons. There was even more about how the world worked, there was a lot more with Queen Amberly & King Clarkson, there was some great moments between the final four girls. It felt like Cass really went for it in the final book. No, not everything was tied up in a neat bow, BUT I didn’t mind. I was okay with there still being a few loose strings.
America comes to a decision in this book and it was definitely difficult to watch her at times. She played keep away with her heart. She knew how she felt, but the idea of telling Maxon was difficult. Maxon was also playing hot and cold with her at times, but I think that came from not wanting to put himself all in without knowing how she felt about him. It also didn’t help that King Clarkson was very against America
America pulled a couple of stunts that infuriated the king, he made it very clear on multiple occasions that America was not the one, forgetting of course that it was Maxon’s choice who he wanted. King Clarkson was a very controlling, strong-willed and often quite cruel to his own son. I was hoping that The Elite would be the extent of his controlling, domineering attitude, but unfortunately, I was wrong.
Finally, I started to like Aspen a whole lot better. Definitely disappointed that it took so long for me to like him, but glad that it happened at all. Aspen’s got secrets of his own, and honestly, I suspected what the secret was early on, but it wasn’t until the end that my suspicions were confirmed. He did some great things for America and Maxon, including one thing at the very end that I thought was fitting.
There was more on the politics as things became quite dangerous in the palace. Yet, I wasn’t bored. I actually found it to be very fascinating. I always wanted to know what was going on and who was behind all this and why. I’m definitely glad we got answers about this part. I would have been bummed if we did not.
I was thrilled with how things went with the final 4 girls. Things you never expected to happen, happen. Alliances changed in startling ways, so serious kudos to Cass for that. I love when unexpected things happen, it adds more intrigue to the story.
Fantastic ending to the series and this will be getting 5 stars from me. Like I said earlier, I found it to be the best book of the series. The entire series was addicting and I am so gonna miss this series.

One thought on “The One (The Selection #3) by Kiera Cass”