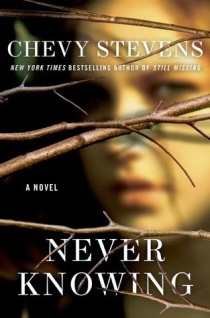 Book Title: Never Knowing
Author: Chevy Stevens
Publish Date: July 5th, 2011
Publisher: St. Martins Press
Genre: Adult Mystery
Standalone
Book Link: Goodreads
Purchase Links: Amazon, Barnes & Noble, The Book Depository
Synopsis from Goodreads:
The second novel by Chevy Stevens, author of bestseller STILL MISSING.At thirty-three Sara Gallagher is finally happy. Her antique furniture restoration business is taking off and she’s engaged to a wonderful man. But there’s one big question that still haunts her — who are her birth parents? Sara is finally ready to find out. Sara’s birth mother rejects her—again. Then she discovers her biological father is an infamous killer who’s been hunting women every summer for almost forty years. Sara tries to come to terms with her horrifying parentage — and her fears that she’s inherited more than his looks — with her therapist, Nadine, who we first met in “Still Missing.” But soon Sara realizes the only thing worse than finding out your father is a killer is him finding out about you. Some questions are better left unanswered. “Never knowing” is a complex and compelling portrayal of one woman’s quest to understand where she comes from. That is, if she can survive…
Disclaimer: I got this book from the library.
Review:
I was really excited about this book when I first started it, but that excitement waned as I read the book which really bummed me out. I was excited about this book because I love stories about adoption. Plus I knew very little about my own father so I wanted to see how Sara’s story played out.
I feel like I’ve said this multiple times recently, but I don’t have to like the characters in order to like the book. However, Sara was obnoxious. I get wanting to know about your biological parents. I get wanting to know where you came from, but clearly Sara’s birth-mother didn’t want to talk to her and after finding out that her father was the infamous Campsite Killer, Sara should have just dropped it.
I found her to be very selfish and I completely agreed with Evan, her fiance, the entire book. She didn’t know how to just let it go. She put her fiance in danger, she put her daughter in danger. Not cool and she definitely was not protecting Ally even though she swore up and down that protecting Ally was her priority.
The character development was lacking pretty much across the board, which bummed me out.  as I put very high emphasis on wanting well developed characters. The most well developed character I thought was Ally. It’s hard for children to be well developed characters in books, but that was one thing that Stevens did well in this book.
The pacing was great and I did enjoy the ending of the book. It was exactly how I would have ended the book if I were Stevens. However the character development and most specifically, Sara’s actions throughout the entire book really ruined the book for me. So that is why I am going to have to give the book 3 stars.I didn’t hate it, but I also didn’t love it.