Hi guys! Initially I planned to film a vlog about the books I was planning on reading next but as I am now fighting a cold, I figured you guys wouldn’t want to see my blotchy, snotty face. So instead, I am going to tell you guys the next ARC’s I plan on reading. Some of them are older titles that I just have not gotten to and some of them are newer titles that are coming up on my schedule.

Lailah (The Styclar Saga #1) by Nikki Kelly
Synopsis
The girl knows she’s different. She doesn’t age. She has no family. She has visions of a past life, but no clear clues as to what she is, or where she comes from. But there is a face in her dreams – a light that breaks through the darkness. She knows his name is Gabriel.On her way home from work, the girl encounters an injured stranger whose name is Jonah. Soon, she will understand that Jonah belongs to a generation of Vampires that serve even darker forces. Jonah and the few like him, are fighting with help from an unlikely ally – a rogue Angel, named Gabriel.In the crossfire between good and evil, love and hate, and life and death, the girl learns her name: Lailah. But when the lines between black and white begin to blur, where in the spectrum will she find her place? And with whom?Gabriel and Jonah both want to protect her. But Lailah will have to fight her own battle to find out who she truly is.

Midnight Thief (Midnight Thief #1) by Livia Blackburne
Synopsis
Growing up on Forge’s streets has taught Kyra how to stretch a coin. And when that’s not enough, her uncanny ability to scale walls and bypass guards helps her take what she needs.But when the leader of the Assassins Guild offers Kyra a lucrative job, she hesitates. She knows how to get by on her own, and she’s not sure she wants to play by his rules. But he’s persistent—and darkly attractive—and Kyra can’t quite resist his pull.Tristam of Brancel is a young Palace knight on a mission. After his best friend is brutally murdered by Demon Riders, a clan of vicious warriors who ride bloodthirsty wildcats, Tristam vows to take them down. But as his investigation deepens, he finds his efforts thwarted by a talented thief, one who sneaks past Palace defenses with uncanny ease.When a fateful raid throws Kyra and Tristam together, the two enemies realize that their best chance at survival—and vengeance—might be to join forces. And as their loyalties are tested to the breaking point, they learn a startling secret about Kyra’s past that threatens to reshape both their lives.In her arresting debut novel, Livia Blackburne creates a captivating world where intrigue prowls around every corner—and danger is a way of life. 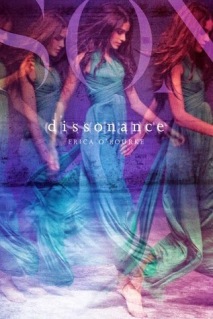 Dissonance (Dissonance #1) by Erica O’Rourke
Synopsis
Delancy Sullivan has always known there’s more to reality than what people see. Every time someone makes a choice, a new, parallel world branches off from the existing one. Eating breakfast or skipping it, turning left instead of right, sneaking out instead of staying in bed ~ all of these choices create an alternate universe in which an echo self takes the road not travelled and makes the opposite decision. As a Walker, someone who can navigate between these worlds, Del’s job is to keep all of the dimensions in harmony.Normally, Del can hear the dissonant frequency that each world emits as clear as a bell. But when a training session in an off-key world goes horribly wrong, she is forbidden from Walking by the Council. But Del’s not big on following the rules and she secretly starts to investigate these other worlds. Something strange is connecting them and it’s not just her random encounters with echo versions of the guy she likes, Simon Lane.But Del’s decisions have unimaginable consequences and, as she begins to fall for the Echo Simons in each world, she draws closer to a truth that the Council of Walkers is trying to hide ~ a secret that threatens the fate of the entire multiverse.

Lies We Tell Ourselves by Robin Talley
Synopsis
In 1959 Virginia, the lives of two girls on opposite sides of the battle for civil rights will be changed forever.Sarah Dunbar is one of the first black students to attend the previously all-white Jefferson High School. An honors student at her old school, she is put into remedial classes, spit on and tormented daily.Linda Hairston is the daughter of one of the town’s most vocal opponents of school integration. She has been taught all her life that the races should be kept “separate but equal.”Forced to work together on a school project, Sarah and Linda must confront harsh truths about race, power and how they really feel about one another.Boldly realistic and emotionally compelling, Lies We Tell Ourselves is a brave and stunning novel about finding truth amid the lies, and finding your voice even when others are determined to silence it. 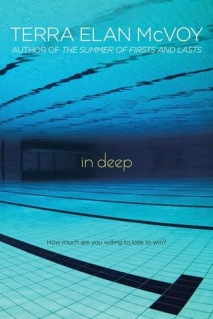 In Deep by Terra Elan McVoy
Synopsis
Ultracompetitive Brynn from The Summer of Firsts and Lasts craves swimming victory—and gets in over her head—in this irresistible novel from Terra Elan McVoy.Swim.
Push.
Breathe.
Swim.Nothing else matters to Brynn as she trains her body and mind to win. Not her mediocre grades and lack of real friends at school. Not the gnawing grief over her fallen hero father. Not the strained relationship with her absent mother and clueless stepdad. In the turquoise water, swimming is an escape and her ticket to somewhere—anywhere—else. And nothing will get in her way of claiming victory.But when the competitive streak follows Brynn out of the pool in a wickedly seductive cat-and-mouse game between herself, her wild best friend, and a hot new college swimmer, Brynn’s single-mindedness gets her in over her head, with much more than a trophy to lose.
These 5 books are the ones I’ll be reading next. Have you read any or all of them? Tell me which one I should read first as I have a very hard time deciding.

2 thoughts on “Next In Line: ARC edition”