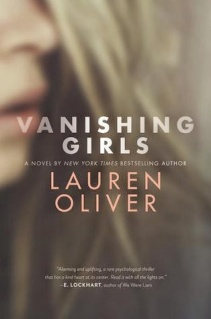 Book Title: Vanishing Girls
Author: Lauren Oliver
Published Date: March 10th, 2015
Publisher: Harper Collins
Genre: YA Mystery
Standalone
Book Link: Goodreads
Purchase Links: Amazon, Barnes & Noble, The Book Depository
Synopsis from Goodreads:
New York Times bestselling author Lauren Oliver delivers a gripping story about two sisters inexorably altered by a terrible accident.Dara and Nick used to be inseparable, but that was before the accident that left Dara’s beautiful face scarred and the two sisters totally estranged. When Dara vanishes on her birthday, Nick thinks Dara is just playing around. But another girl, nine-year-old Madeline Snow, has vanished, too, and Nick becomes increasingly convinced that the two disappearances are linked. Now Nick has to find her sister, before it’s too late.In this edgy and compelling novel, Lauren Oliver creates a world of intrigue, loss, and suspicion as two sisters search to find themselves, and each other.“Alarming and uplifting, a rare psychological thriller that has a kind heart at its center. Read it with all the lights on.” — E. Lockhart, author of We Were Liars.
Disclaimer: I received this eARC from Harper Collins via Edelweiss in exchange for my honest review.
Review:
I think this is where Lauren Oliver and I will have to break up. As a whole, her books just don’t work for me. That makes me sad because so many other people love all of her books and I wonder why I can’t love her books.
I actually really enjoyed Panic, so I was hopeful that Vanishing Girls would be another fabulous read. Unfortunately I was let down in a big way. At first it starts off interestingly enough. I wasn’t totally invested by it, but I wasn’t totally bored by it either.
The problems start to rise to the surface when I realize that this book is written in dual POVs and it goes from past to present. Now I don’t have an issue with either of these things separately, but when they all come together in one book, I get a little twitchy. I worry that it’s going to be hard to follow or that the voices will sound the same.
Sometimes this format works, but in Vanishing Girls it did not. I kept getting confused when it would switch to past or present and then, since the girls’ voices sounded too similar, I’d be confused as to who’s POV I was reading.
That damn twist was obvious for me very early on and the only reason I kept reading was that I was hoping I’d be wrong. It seemed like it was too easy to figure out the twist, and I was massively disappointed by it. It seemed like Oliver just went for the easiest twist to do and she didn’t even try to make it less obvious.
Both sisters were very flat and it seemed like there was very little in the way of character development. It was often hard for me to distinguish who was who. The secondary characters were equally flat and underdeveloped. I was woefully unimpressed by this book and by the characters in this book. I’ll be giving this book 2 stars and unless you want your twist to be really obvious, I’d skip this book.

One thought on “Review: Vanishing Girls by Lauren Oliver”