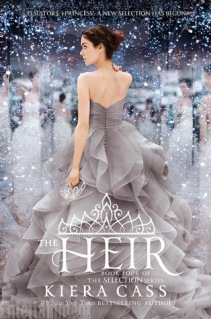 Book Title: The Heir
Author: Kiera Cass
Published Date: May 5th, 2015
Publisher: HarperTeen
Genre: YA Dystopian
Series: Book 4 in The Selection series
Book Link: Goodreads
Purchase Links: Amazon, Barnes & Noble, The Book Depository
Synopsis from Goodreads
Twenty years ago, America Singer entered the Selection and won Prince Maxon’s heart. Now the time has come for Princess Eadlyn to hold a Selection of her own. Eadlyn doesn’t expect her Selection to be anything like her parents’ fairy-tale love story. But as the competition begins, she may discover that finding her own happily ever after isn’t as impossible as she always thought.
Disclaimer: This book was a personal purchase.
Review:
Hello again, book crack!
Okay, I’m strangely obsessed with this series. It’s like crack, as my fellow blogger, Andi said last year.
Overall, I really liked Eadlyn. I definitely liked her more than I liked America. Eadlyn had her moments where I wanted to strangle her, but they were few and far between. Her attitude about love was so similar to mine that I think that was a big part of the reason why I liked her so much. She wasn’t dying to be married, she didn’t go gaga over every boy in the palace. She was stubborn and very, very hardheaded just like myself.
She wasn’t perfect though. She had a close relationship with her brothers and her parents, but she was kind of controlling to her twin brother Ahren. There’s a moment near the end of the book that drove me absolutely crazy because of this and I definitely didn’t love her actions during this part.
I really didn’t feel a whole lot of chemistry between her or any of the Selected, however there were a few standouts: Kile, the boy she’s known her entire life. There’s a boy who is not even part of the selection, but Eadlyn seems interested in him. There’s a boy who comes with a language barrier, but I found him endearing. And finally there was another boy, who seemed to be a slight frontrunner. I honestly don’t know which boy she’ll end up with (if any of them)
I did really enjoy this book, and I definitely enjoyed Eadlyn a heck of a lot more than I enjoyed her mother. I am super excited to see if she picks anyone in the end. I am giving this book 4 stars. Oh and if someone could make me the dress Eadlyn is wearing on the cover, I’d appreciate that.

2 thoughts on “Review: The Heir (The Selection #4) by Kiera Cass”