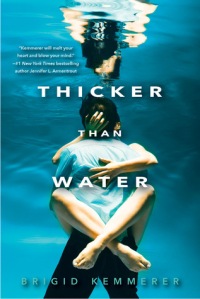 Summary from Goodreads:
On his own
Thomas Bellweather hasn’t been in town long. Just long enough for his newlywed mother to be murdered, and for his new stepdad’s cop colleagues to decide Thomas is the primary suspect.

Not that there’s any evidence. But before Thomas got to Garretts Mill there had just been one other murder in twenty years.

The only person who believes him is Charlotte Rooker, little sister to three cops and, with her soft hands and sweet curves, straight-up dangerous to Thomas. Her best friend was the other murder vic. And she’d like a couple answers.

Answers that could get them both killed, and reveal a truth Thomas would die to keep hidden…

Review
I didn’t know much about this book before I sat down to read it. I felt like it had promise and it had so much potential to be awesome. I also tried to avoid other early reviews of this book because I really didn’t want my reading experience to be tainted.

So I dove into this book with an acceptable amount of anticipation and, at first, I was disappointed with it and contemplated DNFing it. I just could not get into it because the pacing was so slow and some of the characters frustrated me. But I wanted this book to be awesome and I could see the potential in the main characters, Charlotte & Tommy.

So I kept reading and it kept getting better. I am SO happy that it improved because it ended up being a captivating read that kept me guessing all the way through.

I know a lot of people had issues with Charlotte and I get why, but I actually really liked her. Yes her family was crazy overprotective and that would have driven me nuts. Given what had happened many years ago to Charlotte’s classmate, I couldn’t totally blame them. She was also very passive and didn’t stand up for herself. That was definitely something that bothered me. But it’s the kind of thing that ALWAYS bothers me about girls (and guys) who are passive & don’t stand up for themselves. Charlotte had a great character arc, so I was able to get over her passivity & pushover-ness.

Tommy’s arc went places I was never expecting it to. I did love the relationship between him and his stepdad and how that unraveled throughout the book. I felt like that was done really well and I was really happy. I was very annoyed with how he was treated initially by the police, investigators etc. That was almost enough to get me to DNF the book, but like I said before, I am really glad I stuck with this book.

I want to talk about more of the book, but I’m not going to spoil things. So all I’ll say, is you need to read this book. It had twists & turns & even some utter mind-fuckery. I am giving this book 4 stars, mostly because of the slow start to this book and the crappy way Tommy was treated by law enforcement.

Brigid Kemmerer was born in Omaha, Nebraska, though her parents quickly moved her all over the United States, from the desert in Albuquerque, New Mexico, to the lakeside in Cleveland, Ohio, and several stops in between, eventually settling near Annapolis, Maryland. Brigid started writing in high school, and her first real “novel” was about four vampire brothers causing a ruckus in the suburbs. Those four brothers are the same boys living in the pages of The Elemental Series, so Brigid likes to say she’s had four teenage boys taking up space in her head for the last seventeen years. (Though sometimes that just makes her sound nuts.)

Brigid writes anywhere she can find a place to sit down (and she’s embarrassed to say a great many pages of The Elemental Series were written while sitting on the floor in the basement of a hotel while she was attending a writers’ conference). Most writers enjoy peace and quiet while writing, but Brigid prefers pandemonium. A good thing, considering she has three boys in the house, ranging in age from an infant to a teenager.

While writing STORM, it’s ironic to note that Brigid’s personal life was plagued by water problems: her basement flooded three times, her roof leaked, her kitchen faucet broke, causing the cabinet underneath to be destroyed by water, the wall in her son’s room had to be torn down because water had crept into the wall, and her bedroom wall recently developed a minor leak. Considering SPARK, book 2 in the series, is about the brother who controls fire, Brigid is currently making sure all the smoke detectors in her house have batteries.

Brigid loves hearing from people, and she probably won’t refer to herself in the third person like this if you actually correspond with her. She has a smartphone surgically attached to her person nearby at all times, and email is the best way to reach her. Her email address is brigidmary@gmail.com.