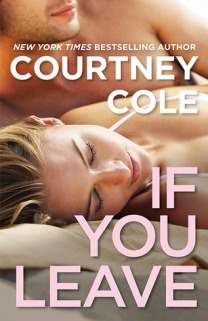 Book Title: If You Leave
Author: Courtney Cole
Published Date: August 6th, 2013
Publisher: Forever
Genre: NA/Romance
Series: Book 2 in the Beautifully Broken series
Book Link: Goodreads
Purchase Link: Amazon
Synopsis from Goodreads:
26-year old Gabriel Vincent is a badass hero. Or he used to be, anyway. As an ex-Army Ranger, Gabe never thought he needed anyone. But after one horrible night in Afghanistan scars him in a way that he can’t get past, he needs someone who can help him heal…even if he doesn’t realize it.25-year old Madison Hill doesn’t need anybody…or so she thinks. She grew up watching her parents’ messed-up abusive relationship and she knows there’s no way in hell that she’s ever letting that happen to her.They don’t know it in the beginning, but Gabriel and Madison will soon develop a weakness: Each other.But Gabriel’s got a secret, a hidden monster that he’s afraid Maddy could never overcome… And Maddy’s got issues that she’s afraid Gabe will never understand. They quickly realize that they need each other to be whole, but at the same time they know that they’ve got demons to fight.And the problem with demons is that they never die quietly.
Disclaimer: This e-book was a personal purchase.
Review:
I read If You Stay at the very beginning of my blogging endeavor and I had absolutely loved it. I wasn’t sure if If You Leave would have the same special-ness that book one had had. I needn’t have worried. If possible I loved If You Leave even more than the first book.
We had gotten snapshots of Madison in the first book but I had no idea how much alike we were until this book. Like Madison, I had to deal with my mother’s marriage to an abusive man right in my teenage years. The very time that I was starting to notice boys was the very time my mother was married for the second time. I knew that the way he was treating my mother was not okay and I got angry with her for not leaving sooner. It took her 12 years to leave the marriage, something Madison’s mother was not brave enough to do.
Because of having to watch my mom get treated in such a terrible way, I built up walls. Walls the size of The Great Wall of China. I was not going to put myself in a position to get hurt like my mother had. So I resonated big time with Madison. I knew what it felt like to have those walls up.It’s never really said outright but I am guessing that Madison had friends that told her that she could overcome this if she really wanted to and that she was not her mother. Trust me, I had friends tell me the exact same thing. But it’s not easy. It’s not easy to let your guard down if you’ve been a witness to some truly shitty things.
“It’s because of my parents that I’m afraid to get involved with anyone.It’s because of them that I am afraid any relationship I get into will hurt me.Just like my dad hurt my mom.” -Madison
Oh sure Madison dates, like the guy Ethan who she has known since kindergarten and who had puked up chocolate milk all over her.Too bad he’s vanilla and Madison isn’t interested in him at all.
“Oh yeah,that’s just what I want. The guy who vomited up his chocolate milk on me in kindergarten doing my pap smear.” -Madison
In comes sexy as hell Gabriel Vincent.Oh man he was cocky and arrogant from the beginning but I suspected that was a facade for the demons that were buried inside of him. He definitely did not make the best of impressions the first night they met,but over time he softened up and in turn so did Madison. She got to see his softer side and his protective side as he dealt with his sister Jacey and her crazy as hell boyfriend. Gabriel began to make Madison feel safe.
When crap goes down,Gabriel begins to realize that he cannot just push his issues aside. He’s got to deal with them. If he doesn’t he could lose Madison…forever.
Watching Madison’s walls slowly inch down was awesome. It was inspiring and it gave me a lot of hope. Watching her let Gabe in, in every way was heartwarming and it made me cry on multiple times. Gabe’s decision to get help for his issues was awesome too. I liked that he realized that he couldn’t deal with it on his own and that it wasn’t a crime or a mark against his manhood to need and therefore get help.
Getting to see Mila and Pax was an awesome surprise. I loved how they were still so close as they were in the first book.
This book gets 5 stars from me. If at all possible, I loved this book more than If I Stay mostly because of how well I related to Madison and how she was feeling. I cannot wait to read the next book in this series.
“Love is deathless.”