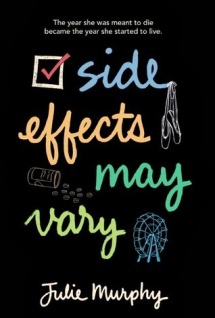 Book Title: Side Effects May Vary
Author: Julie Murphy
Release Date: March 14th, 2014
Publisher: Balzer + Bray
Genre: YA/Contemporary
Standalone
Book Link: Goodreads
Pre-Order Links: Amazon, Barnes & Noble, Book Depository
Synopsis from Goodreads:
What if you’d been living your life as if you were dying—only to find out that you had your whole future ahead of you? When sixteen-year-old Alice is diagnosed with leukemia, her prognosis is grim. To maximize the time she does have, she vows to spend her final months righting wrongs—however she sees fit. She convinces her friend Harvey, whom she knows has always had feelings for her, to help her with a crazy bucket list that’s as much about revenge (humiliating her ex-boyfriend and getting back at her arch nemesis) as it is about hope (doing something unexpectedly kind for a stranger and reliving some childhood memories). But just when Alice’s scores are settled, she goes into remission.Now Alice is forced to face the consequences of all that she’s said and done, as well as her true feelings for Harvey. But has she done irreparable damage to the people around her, and to the one person who matters most? Julie Murphy’s SIDE EFFECTS MAY VARY is a fearless and moving tour de force about love, life, and facing your own mortality.Harvey laughed to himself in a sad way and rubbed his eyes. “You want me to help you with a list of things you won’t disclose to me.” He leaned forward and bit the skin around his thumb. “Classic.”“You won’t regret it.”“But—”“Harvey,” I said, my voice low. “Trust me.”I knew what this looked like. It looked like I was using Harvey. But here was the reality of the situation: the minute my life went from semi-permanent to most likely temporary, I decided to latch on to everything in my world that had always been permanent, and for me, Harvey was so permanent he was concrete.
Disclaimer: I received this e-ARC from Balzer + Bray via Edelweiss in exchange for my honest review.
Review:
I had heard a lot of amazing things about this one months ago. It was starting to show up on fellow readers’ Goodreads lists, and recently, ARC’s were becoming more available. So when Edelweiss put this one up, I snatched it in a hurry. I am a real sucker for the “tough subjects” books. You know, the cancer books, the terminal illness books as well as other tough subject books.

I was a little nervous when I started this one. Mostly because many of the people who have already read it, loved it. While I didn’t love it, I definitely liked it a lot. When you are told that your cancer is in remission, you feel a variety of different emotions. It’s especially strange after you’ve been told that there’s nothing more they can do and that you will die and probably soon.

That’s how Alice feels. She knows that she should be over the moon excited that her life is not nearing an end,at least not yet, and that she has time to be with her loved ones. Yet, that’s not how she feels. Now that she’s not dying there are things that she feels that need to be done. Admittedly, she uses the boy who has loved her, to her advantage.

Harvey knows that Alice knows that he’d do anything for her. He’d help humiliate the boy she dated before she got sick. He’d help humiliate the girl who her boyfriend was cheating on her with.He doesn’t grow a backbone until the book is nearly over. That really bothered me. While I know that Alice feels like she needs to do this, it’s hard to be understanding when she is so obviously using the boy who loves her.

I liked Alice pretty much the whole time even though I know there were parts where she was pretty mean. Until you’ve been in her position, you really cannot say how you’d react to the news that your seemingly incurable cancer is in remission.

I loved all the parental involvement in this book. I mean having Alice’s parents involved was practically a given since she had such a serious illness. Having Harvey’s mom, Natalie so present in the book was awesome. I really loved how all five of them were so close. It was like a big happy family at times. You don’t usually have that in YA books.

I didn’t love the dual POV combined with switching from the then and now time periods. At times it just got really confusing. I think it would have been better had Julie picked one. Either a dual POV or then & now time periods. At the beginning, I kept having to flip back a few pages on my Kindle because I would get confused about the timelines.

I cried a little bit in the beginning and a little bit in the end, so the feels were there, but not as much as I was expecting them to be. I am a bit disappointed that I didn’t love this one like I wanted to, however, I did like it a lot and that is why I am going to give it 4 stars. Yes I would absolutely recommend this book.