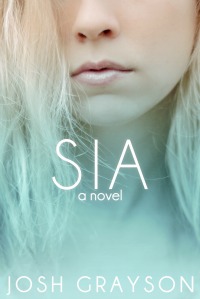 Book Title: Sia
Author: Josh Grayson
Publish Date: November 20th, 2013
Published By: Josh Grayson
Genre: YA/Contemporary/Romace
Standalone
Book Link: Goodreads
Pre-Order Links:
Synopsis from Goodreads:
When seventeen-year-old Sia wakes up on a park bench, she has no idea who or where she is. Yet after a week of being homeless, she’s reunited with her family. At school, she’s powerful and popular. At home, she’s wealthy beyond her dreams. But she quickly realizes her perfect life is a lie. Her family is falling apart and her friends are snobby, cruel and plastic. Worse yet, she discovers she was the cruelest one. Mortified by her past, she embarks on a journey of redemption and falls for Kyle, the “geek” she once tormented. Yet all the time she wonders if, when her memories return, she’ll become the bully she was before…and if she’ll lose Kyle.
Disclaimer: I received this e-galley from Netgalley in exchange for my honest review.
Review:
I was thrilled when Netgalley approved me for this title. The premise looked awesome and I was hoping that the premise would match the book in awesome-ness. It totally did. This book was about reinventing yourself. One might also say that it involved learning to find yourself all over again. Sia’s memory loss allowed her to not only change herself for the better,but it also allowed her to surround herself with… I don’t want to say better people, but different people.
Carol was a huge part of that. She took care of Sia while Sia was homeless and living on the streets for that one week. It was Carol who showed Sia the meaning of kindness. Something the old Sia didn’t understand.I loved Carol. She was everything that Sia needed that week and she continued to exude kindness to Sia even after Sia returned home to her family. Carol was the epitome of being grateful for what she had, while still working hard to better herself. That, I believe was Sia’s inspiration.
Watching Sia change from the fashion obsessed, cruel high schooler that she used to be to the kindhearted, gentle and generous person she became was amazing. I know her friends, particularly Amber had a rough time of it, but seeing Sia not cave when Amber started up with her old tricks again was awesome. Sia no longer cared about fashion, boys and popularity. She cared about being a good person who cared about others.
This book could have easily been titled redemption as Sia was redeemed. Her amnesia allowed her to become a different person. She got a chance to change and she happily took that chance. Something not everyone would have been brave enough to do.
Kyle was a total sweetheart and he was a much better boyfriend than Sia’s previous boyfriend Duke, They were polar opposites which I guess made sense given Sia’s development throughout the book.
I have to give this book 4 stars. It was a great read but I really felt like the last few chapters were rushed and I really didn’t like that. I didn’t understand why they were rushed and I feel like it would have been a better read if the last few chapters were just a bit longer.

Book Title: Torn (Torn #1)
Author: K.A. Robinson
Published Date: May 7th, 2013
Publisher: Atria Publishing
Genre: NA/Romance
Series: Book 1 in Torn series
Book Link: Goodreads
Purchase Link: Amazon
Synopsis from Goodreads:
Chloe hasn’t had the best life. With a mother who is gone more often than not, she has had to raise herself. After graduating high school, she leaves to start a new life away at West Virginia University with her best friends Amber and Logan, determined to leave her demons in the past.

On her first day, she meets a stranger who takes her breath away at first sight. Until she met Drake, no one had ever sparked her interest. Now this tattooed and pierced bad boy is all she can think about, no matter how hard she fights it.Falling for Drake was never part of her plans, but when it happens, things seem to do anything but fall into place.Dealing with a tragic past, Drake has never cared about anyone else but himself and his band. But when Chloe takes the empty seat next to him in class, things start to change. Instantly drawn to her, he begins to wonder if one girl can take a cold hearted womanizer and change every part of him?

Long hidden feelings are revealed and friendships tested to the brink.
Disclaimer: I received this book from Netgalley in exchange for my honest review.
Review:
I just… I am not even sure why this book has gotten so many high ratings. I just don’t get it. I tried really hard to understand why this book was so highly rated. Drake did nothing for me and actually I lost a LOT of respect for him throughout the book. What kind of guy hooks up with a woman who’s spoken for? This of course leads into my extremely negative feelings about Chloe. I was really hoping to like her and I did until she got in over her head and played with both guys’ hearts.
It’s extremely disrespectful to essentially help someone cheat on their boyfriend. I am never going to think that was okay.Because it wasn’t. Drake struck me as pushy and abrasive and arrogant.Definitely not my type of guy. But the aggravating part is that Chloe lapped it up. That was unbelievably frustrating.Logan was a total sweetheart and actually he really reminded me of my ex.All my ex wanted for me, was for me to be happy. Yes, Logan got a teeny bit controlling at times and that was definitely not okay. I would have nipped it in the bud immediately.
Chloe seemed very emotionally immature,especially in the ways that she handled Drake and Logan. She never once thought about how they were feeling. Nope it was all about her, her, her. I actually liked the bits with her mom even if I couldn’t relate. It made Chloe a little more likable for me. I also liked her friendships with Amber, Rachel and Jade and I don’t think enough attention was paid to them.
Overall, I really didn’t like this book. Chloe was selfish and emotionally immature, Drake had no morals and Logan was having to play second best even if he didn’t realize it.I really was very disappointed by this book and that’s why I have to give it two stars.