Skip to content
Okay you guys, this review will be a little different. Several months ago a family friend asked me to read & review the story her 8th grade daughter chose to write for her 8th grade project. I immediately agreed to do it but unfortunately I wasn’t able to get to it until recently.
Without further ado, here it is… 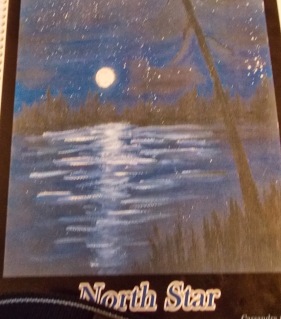 Book Title: North Star
Author: Cassandra Gunn
Genre: YA/Mystery
Synopsis:
15 year old Anne finds herself facing the pain and loneliness after the death of her parents.She is adopted by a wealthy couple that care about nothing other than power, and the feeling of neglect haunts her in her sleep.
This story is about a girl, struggling to find courage as she seeks for the truth of a mystery that could unlock her past, all the while feeling out of place, and missing the acceptance of a true friend. At first Anne thinks there is no one standing by her side,but in the end she comes to realize there are many people who care for her,she just has yet to discover them.
Anne is faced with many challenges,builds unexpected friendships,learns how love can blind one’s judgement and discovers the light and darkness in all of us.
Disclaimer: I received this book from the author.
Review:
Ahhh, I loved this story so much. Anne was a likable character who showed significant depth through the entire story.Her adoptive parents were a totally different story. They were awful human beings,made even worse when we learned what sort of dark secrets they were keeping from Anne regarding her parents.

Anne’s living the dream of being dressed in finery,but the truth is, this isn’t her. She’s not comfortable  in the array of finery that she is dressed in every single day. She longs for the days of ice skating with her birth mother prior to the accident.The descriptions of the different ice skating moves was great. I don’t know much about ice skating (except I can’t do it) so it was really great to see an author explain the ice skating terminology.

Daphne was a good friend to Anne at first but it almost felt as the friendship was conditional. Only and until Anne misbehaved at school was Daphne friends with her. Clarice start off as a bit of a witch,but once we got to know her, she didn’t seem as mean. Which was good because by that time,Anne needed a friend.

The secondary characters Francine, Sophia and James were all great in their own way.They each had some flaws but those flaws did not overrule their positive attributes.

The editing was fantastic. I was so excited to see that an 8th grade project could be edited so well.I have a feeling that the author is destined to be a writer as this story shows what she can do already.I will be giving this story 4 stars. It had great characters, great story flow and I loved the epilogue. The only thing I wish, is that it was longer.