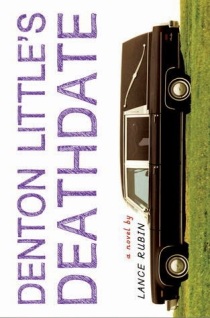 Book Title: Denton Little’s Deathdate
Author: Lance Rubin
Published Date: April 14th, 2015
Publisher: Random House Children’s
Genre: YA, Science Fiction
Standalone
Book Link: Goodreads
Pre-Order Links: Amazon, Barnes & Noble, The Book Depository
Synopsis from Goodreads:
Fans of John Green and Matthew Quick: Get ready to die laughing.Denton Little’s Deathdate takes place in a world exactly like our own except that everyone knows the day they will die. For 17-year-old Denton Little, that’s tomorrow, the day of his senior prom.Despite his early deathdate, Denton has always wanted to live a normal life, but his final days are filled with dramatic firsts. First hangover. First sex. First love triangle (as the first sex seems to have happened not with his adoring girlfriend, but with his best friend’s hostile sister. Though he’s not totally sure. See: first hangover.) His anxiety builds when he discovers a strange purple rash making its way up his body. Is this what will kill him? And then a strange man shows up at his funeral, claiming to have known Denton’s long-deceased mother, and warning him to beware of suspicious government characters…. Suddenly Denton’s life is filled with mysterious questions and precious little time to find the answers.Debut author Lance Rubin takes us on a fast, furious, and outrageously funny ride through the last hours of a teenager’s life as he searches for love, meaning, answers, and (just maybe) a way to live on.
Disclaimer: I received this e-ARC from Random House Children’s via NetGalley in exchange for my honest review.
Review:
I don’t know about you, but I’ve always been morbidly curious about death. I gotta say that if I got to find out when I was going to die, I’d be relieved. I mean as of right now, we don’t know when our time will come. So, in that way, I was envious of everyone living in Denton’s world. They all knew when they’d die.
The beginning of the story started off really interesting. We meet Denton the day before his deathday where he will attend his funeral and then the sitting, where everyone basically sits around and waits for the person to keel over.
Quickly, we realize that there’s a lot of drama going on. Apparently Denton had sex the night before, for the first time. That in itself isn’t drama filled, but the fact that it was with his best friend’s sister is. Denton’s been dating the same girl for awhile, but she isn’t the one he had sex with. So there ya go, typical teenage drama right from the start.
Denton is quirky and unique, but as the book goes on, things continue to go from just odd, to absolutely outrageous, and inconceivable. Normally reading books about how shit hits the fan unexpectedly is at least mildly interesting to me. But this time it was just too much and too fast. I barely got over one surprise in the book before another one showed up.
I liked Denton, his girlfriend and his best friend, they were usually pretty funny, and to be honest, they saved the book for me. The other characters felt very flat to me, which really bummed me out because that tells me the author didn’t flesh them out enough.
The pacing was very uneven. Sometimes things would be going at a decent pace and then shit would hit the fan and it would speed up, only to slow back down a chapter or two later. I wouldn’t say this was a bad book, but I was overall very indifferent to it. So I’m going to give this book 3 stars. I’m not sure I’d recommend this book.