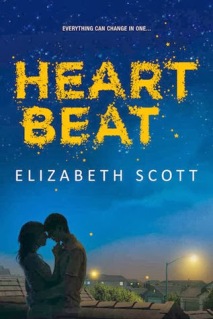 Book Title: Heartbeat
Author: Elizabeth Scott
Publish Date: January 28th, 2014
Publisher: Harlequin Teen
Genre: YA/Contemporary
Standalone
Book Link: Goodreads
Pre-Order Links: Amazon, Barnes & Noble
Synopsis from Goodreads:
Life. Death. And…Love?Emma would give anything to talk to her mother one last time. Tell her about her slipping grades, her anger with her stepfather, and the boy with the bad reputation who might be the only one Emma can be herself with.But Emma can’t tell her mother anything. Because her mother is brain-dead and being kept alive by machines for the baby growing inside her.Meeting bad-boy Caleb Harrison wouldn’t have interested Old Emma. But New Emma-the one who exists in a fog of grief, who no longer cares about school, whose only social outlet is her best friend Olivia-New Emma is startled by the connection she and Caleb forge.Feeling her own heart beat again wakes Emma from the grief that has grayed her existence. Is there hope for life after death-and maybe, for love?
Disclaimer: I received this book from Edelweiss in exchange for my honest opinion.
Review:
Grief manifests itself in so many ways, and sometimes it’s hard to feel pity for someone who uses their grief as an excuse to treat people like crap. There is no reason to treat people like crap.
That was my biggest issue with Emma. She’s grieving the loss of her mother to the point where she treats her stepfather like crap.He’s clearly hurting as well but Emma doesn’t see it. All she sees is the decision to keep her mom on life support until it’s safe for her baby brother to be born. She doesn’t even consider the probability that her stepfather and her mother had already had that “what if” conversation.
I get it. I get feeling like no one else knows her mother like she does. I feel the same way about my own mother. But  what I don’t understand is why she is so angry at Dan. He didn’t kill her mother. Yet Emma blames him completely for it.
Emma was horribly selfish all the way through the book and it frustrated me to no end.I felt worse for Dan actually. He was trying to talk to her. He was hurting and he was scared for the baby.Yet Emma turned a deaf ear to him. He was the only family she had nearby and he still loved her and needed her in his life. Emma was so angry that she didn’t see it.
The thing with Caleb was weird too. I didn’t buy that they could be in love by the end of the book. That was a relationship formed out of convenience. Caleb and Emma understood each other, but a couple has to have more than just a shared experience of watching someone they love die.While a truamautic experience can and often does change people, this was just too much. She didn’t even know Caleb before her mother died and suddenly just because she dies, Emma notices him? Yeah, call me skeptical, but that’s not how it works.
The only portion I liked was the bit with Dan about 3/4’s of the way through it. Emma finally got all her feelings out and Dan was allowed to get his out too. However, I don’t think the instant forgiveness thing worked here.Given how angry Emma was throughout the book, it’s just not plausible that she’s suddenly not angry with Dan for his decision.
The premise was good and I was super excited for it. However the execution of it fell flat. The only character I actually liked was Dan, the rest of them were boring and obnoxious.Editing-wise the book was great.This book will be getting 2 stars. I didn’t enjoy this one all that much.