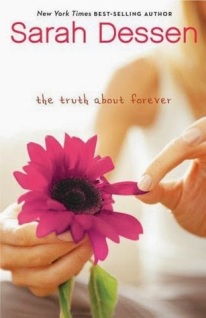 Book Title: The Truth About Forever
Author: Sarah Dessen
Publisher: Penguin Group
Published Date: May 11th, 2004
Genre: YA Contemporary
Standalone
Book Link: Goodreads
Purchase Links: Amazon, Barnes & Noble
Synopsis from Goodreads:
A long, hot summer…That’s what Macy has to look forward to while her boyfriend, Jason, is away at Brain Camp. Days will be spent at a boring job in the library, evenings will be filled with vocabulary drills for the SATs, and spare time will be passed with her mother, the two of them sharing a silent grief at the traumatic loss of Macy’s father.But sometimes, unexpected things can happen—things such as the catering job at Wish, with its fun-loving, chaotic crew. Or her sister’s project of renovating the neglected beach house, awakening long-buried memories. Things such as meeting Wes, a boy with a past, a taste for Truth-telling, and an amazing artistic talent, the kind of boy who could turn any girl’s world upside down. As Macy ventures out of her shell, she begins to wonder, Is it really better to be safe than sorry?
Disclaimer: This book is a library book.
Review:
What a huge disappointment this book turned out to be for me. I know I am definitely in the minority with this book, but I could not get into it at all. I struggled pretty much the whole way through. Macy is considered a “good girl” she is smart, spends her summer evenings prepping for the SAT’s and has a “perfect” boyfriend who expects her to be perfect as well. See, right there I would have had an issue.
Macy’s boyfriend Jason was awful. When she tried to express her feelings for him, he called her clingy and didn’t want anything to do with her. Plus he was BORING. Holy moly, he acted like a 40 year old businessman instead of a kind teenager with a good heart. Macy hasn’t known any different and it takes her several weeks after Jason departs for Brain Camp, for her to realize that Jason never made her feel good about herself.
In fact, he was constantly critical of her. In the letters he sent her in the beginning, he criticized her for not being devoted enough to a library job, the letters he wrote to her included reminders of things she needed to keep on top of at the library. He basically treated her like crap and Macy simply thought “I know how he feels about me.” She was brainwashed into thinking that this relationship and the way Jason was treating her, was okay.
The parts about the catering were at least mildly interesting, but the character development definitely lacked. No one really grew, there wasn’t any intriguing story arcs. Wes, was boring too, but at least he was a decent individual whose goals didn’t stop him from being a good person and a friend to those who needed him.
I think a lot more could have been done with Macy’s grief and how she dealt with it. I felt that storyline wasn’t as present as I was hoping it was. It could have made for a very emotional book, and that would have vastly improved the book. I don’t think the author went for it as well as she could have.
The book itself was very slow and I am really not a fan of books that are this slow. That coupled with the lackluster character development and the boring-ness of Macy & Wes’ relationship forces me to give the book 2 stars. I am really bummed about it, but this book just didn’t work for me. I definitely seem to be in the minority, so definitely give it a try. 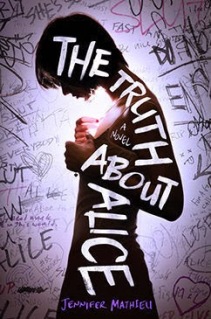 Book Title: The Truth About Alice
Author: Jennifer Matheiu
Release Date: June 3rd, 2014
Publisher: Macmillan Children’s Publishing Group
Genre: YA/Contemporary
Standalone
Book Link: Goodreads
Pre-Order Links: Amazon, Barnes & Noble, Book Depository
Synopsis from Goodreads:
Everyone has a lot to say about Alice Franklin, and it’s stopped mattering whether it’s true. The rumors started at a party when Alice supposedly had sex with two guys in one night. When school starts everyone almost forgets about Alice until one of those guys, super-popular Brandon, dies in a car wreck that was allegedly all Alice’s fault. Now the only friend she has is a boy who may be the only other person who knows the truth, but is too afraid to admit it. Told from the perspectives of popular girl Elaine, football star Josh, former outcast Kelsie, and shy genius Kurt, we see how everyone has a motive to bring – and keep – Alice down.
Disclaimer: I received this e-galley from Macmillan via NetGalley in exchange for my honest review.
Review:
Ever have really high hopes for a book and then you read it and find yourself really bummed by a lot of parts in the book? Well that was me with this book. I was about 40% of the way through it and I was so frustrated and angry at so many characters. These characters thought more about being popular than about being a good friend.I mean all of these rumors were swirling around Alice and not once did these kids stand up and stop the rumors. Nope they continued to trash her and spread increasingly horrible rumors about her.
It absolutely killed me to see that no one was willing to forgo their popularity to stand by Alice. It was heartbreaking to see that the only one who was on her side was nerdy Kurt. He was on her side from the beginning. Not because he wanted to sleep with her but because he knew she needed someone to be on her side.
Ugh Kelsie was a terrible person & friend. She valued popularity over friendship. I mean I get it, in high school popularity is the ultimate goal but I was so frustrated by her actions (she was the one who bothered me most) I really wanted her to have some character development but she didn’t really. I mean she sort of did, but the author kind of half-assed it at the end.
I loved Kurt and his interactions with Alice were so sincere and they weren’t forced at all. They were my favorite part of the book and honestly the only reason that this book wasn’t a total miss with me. His friendship was exactly what Alice needed so she would know that she still had friends. Yes Kurt had his secrets and yes he didn’t exactly tell her them at the right time,but he did tell her.
I do think Alice may have forgiven him just a tad bit too quickly. I mean the secret that Kurt had was a major one and it threatened to turn everything around. Yet, Kurt didn’t say anything sooner. If he had, Alice would have gotten her life back a lot sooner.So I was a little mad at Kurt for that.
What really made me mad was the bathroom stall where people would just write terrible things about Alice. Things that were totally untrue, but definitely hurtful. As a former victim of bullying, that part was really hard to read.Bullies tear other people down because they want to feel better about themselves. That’s not the way to do it people.
Overall I didn’t love the story but I didn’t hate it either. Alice was a big plus in the book but she wasn’t in it enough which is why I didn’t enjoy a lot of it. Plus I really wanted her to have a voice in the story. She didn’t really have a voice until the very end. I think the book would have been much stronger if they eliminated some of the other voices in the story and made more of an emphasis on Alice’s story.
The character development was not as strong as I was expecting in this book which really bummed me out. The author had a chance to really go for it and I don’t think she did that as well as she could have. Kurt and Alice were my favorite parts of the book (and the only two characters that I actually liked) So this book will be getting 3 stars from me.