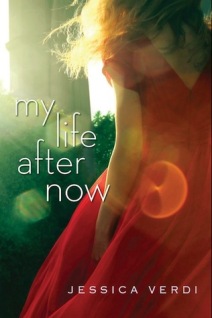 Book Title: My Life After Now
Author: Jessica Verdi
Published Date: April 2nd, 2013
Published By: Sourcebooks Fire
Genre: Contemporary
Standalone
Book Link: Goodreads
Purchase Links: Amazon, Barnes & Noble
Synopsis from Goodreads:
Lucy just had the worst week ever. Seriously, mega bad. And suddenly, it’s all too much—she wants out. Out of her house, out of her head, out of her life. She wants to be a whole new Lucy. So she does something the old Lucy would never dream of.And now her life will never be the same. Now, how will she be able to have a boyfriend? What will she tell her friends? How will she face her family?Now her life is completely different…every moment is a gift. Because now she might not have many moments left.
Disclaimer: This book was a personal purchase.
Review:
This book was amazing. There, got that out of the way.
I wasn’t sure how I would feel about it despite the rave reviews it was getting from the bloggers and bookish friends that I trust. I wasn’t sure if I would be able to relate to it considering I have never been in Lucy’s position.
All of that didn’t matter because what Jessica Verdi did, was create a VERY important book that I believe everyone needs to read.The prose was beautiful,not stilted like some contemporaries are. Jessica Verdi created a book that deals with a tough subject and that include tough subplots under the main plot umbrella.
Lucy is a teenager who makes one mistake and it’s a mistake that she now must deal with for the rest of her life. My heart ached for her. She knew that she had royally screwed up and now she had to pay for it with her health status.This book debunked several myths,one myth being that you won’t get HIV the first time you have unprotected sex. Because that’s exactly what happens.
Lucy had been very careful during her 2 year relationship with her boyfriend but after the week from hell,she just wants to get away. She gets in over her head and suddenly her life is filled with doctors appointments and vials and vials of blood being taken from her. Not to mention a support group that her dads make her attend. It’s a whole new world to her.
Unfortunately it’s not a new world for her two dads. Her dads grew up just when AIDS was prevalent in the 1980’s. They even lost a friend to the virus. They each handle the news differently but what doesn’t change is how much they love Lucy. Thankfully they are the two greatest parents anyone can ask for. Instead of throwing Lucy out of the house when they learn of Lucy’s condition,they decide to keep her as healthy as possible.
Then of course there is Lucy’s drug addicted mom who flitters in and out of their life. She is now pregnant with another baby and she expects Lucy’s dads to take her in until the baby is born and maybe even after.I thought she was incredibly selfish and I really didn’t like her at all and it was clear that Lucy would rather that she disappear again.
Now Evan was a wonderful surprise. I didn’t realize how much I would end up liking him until the end. He was wonderful to Lucy as well. Courtney and Max were great too. Each of them had their own adjustment periods when they learned of Lucy’s condition. I felt that was totally understandable. HIV is still very scary. Especially since there are still so many misconceptions about it.
I really want to give this book a full five stars BUT  Lucy was a teeny bit obnoxious at the beginning of the book so I have to knock it down to a 4.5 but I would still insist that everyone read this wonderful book.