This feature is hosted by the lovely ladies over at The Broke and the Bookish.

I wasn’t sure how easy or hard this topic would be, but I wanted to give myself a challenge. Go check out my dream parings.

Emery Lord & Jessi Kirby
-If these two ever wrote a book together, I would need to stockpile a LOT of kleenex to get through their book-

Sarah J. Maas & Marie Lu
-These two write badass ladies and have beautiful writing. Imagine how amazing their collaboration would be –

Christa Desir & Courtney Summers
-I have a feeling if these two EVER wrote a book together, I’d need a drink to calm the hell down-

Tamara Ireland Stone & Courtney C. Stevens
-These two write characters that are wonderfully & heartbreakingly real. I would lose my crap if they ever wrote a book together-

Brandy Colbert & Tess Sharpe
-Two of my favorite & most underrated authors. Both of these ladies wrote books that broke my heart, and pushed the envelope on those tough topics-

Becky Albertalli & Amy Zhang
-This is a bit of a wild card pick, but Amy’s writing is stunning and Becky’s first book was quirky and adorable. I’d be thrilled if they wrote a book together-

Trish Doller & Peggy Kern
-These two authors have written some of my favorite books. Books that have been hard to read at times, but awesome books nonetheless. If they wrote a book together, it would probably be raw, realistic and amazing-

Abigail Haas & Amanda Panitch
-These ladies are the QUEENS of mind fuckery. My goodness, if they EVER wrote a book together, I’d probably spontaneously combust-

If you did a TTT post this week, leave me the link in the comment section. If we have any of the same picks, don’t forget to tell me.

This feature is hosted by Tynga’s Reviews. It’s a way to show off what books arrived on our shelves.

This week, two of my pre-orders arrived. One book I had read and loved and the other book was a highly anticipated sequel to a book I had loved last year.

I got two e-ARCs from NetGalley.

I stopped by the library and picked up two books. 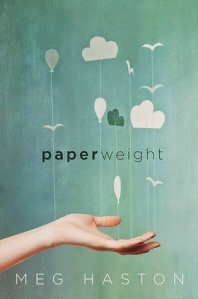 Paperweight by Meg Haston
The Heart of Betrayal (The Remnant Chronicles #2) by Mary E. Pearson

I hope you all had a great week!

Book Title: The Kiss of Deception
Author: Mary E. Pearson
Published Date: July 8th, 2014
Publisher: Henry Holt & Co.
Genre: YA Fantasy
Series: Book One in The Remnant Chronicles series
Book Link: Goodreads
Purchase Links: Amazon, Barnes & Noble
Synopsis from Goodreads:
A princess must find her place in a reborn world.She flees on her wedding day.She steals ancient documents from the Chancellor’s secret collection.She is pursued by bounty hunters sent by her own father.She is Princess Lia, seventeen, First Daughter of the House of Morrighan.The Kingdom of Morrighan is steeped in tradition and the stories of a bygone world, but some traditions Lia can’t abide. Like having to marry someone she’s never met to secure a political alliance.Fed up and ready for a new life, Lia flees to a distant village on the morning of her wedding. She settles in among the common folk, intrigued when two mysterious and handsome strangers arrive—and unaware that one is the jilted prince and the other an assassin sent to kill her. Deceptions swirl and Lia finds herself on the brink of unlocking perilous secrets—secrets that may unravel her world—even as she feels herself falling in love.
Disclaimer: I received this e-ARC from Henry Holt & Co. via NetGalley in exchange for my honest review.
Review:
Despite starting off very slowly, The Kiss of Deception ended up being one heck of an epic fantasy read. It surpassed all of my expectations and I was excited every single time I got to pick it back up again. I didn’t want to stop reading even though my eyes kept closing late at night. Yes it was a long book, but it was so fascinating that I barely noticed the length.

At first, I was worried that I wasn’t going to like it much and it was mostly because it has started off slowly. I normally don’t love books that take awhile to really unfold, but I had spoken to several fellow bloggers who loved this book and who pushed me to be patient with this book. So thank you to those bloggers who wouldn’t let me give up on this book.

Lia is an absolute badass, and she is definitely one of my new favorite female characters. She’s strong, devoted to those she loves, especially Walther, her brother. Honor and duty and tradition are just some of the words that Lia has grown to hate and it’s also those words that drive her to disappear on the day she is to be wed.

She finds herself at a distant village where she met Berdi & Gwynneth. I loved both of these ladies and I loved how they were there for both Lia, and Lia’s best friend, Pauline who had come to this village with Lia. Berdi was the mom Lia really needed and Gywnneth was that friend that everyone needs.

Things just sort of unfold from there and we are introduced to so many characters, including Rafe and Kaden, one of which is the prince, the other is the assassin. I kept trying to guess who was who and I kept failing miserably. This is a love triangle, but it’s really hard because both of these boys end up being quite swoon-worthy and so that’s only one of the reasons I choose to stay firmly on Team Lia.

The world building was glorious and I loved it so much. It was captivating and it drew me in, in a way that I wasn’t expecting. I expect a lot from my fantasy books and The Kiss of Deception absolutely delivered in a big way. I am giving this book 5 stars and I eagerly await book two in this series.