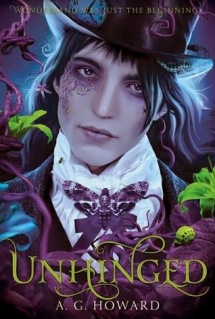 Book Title: Unhinged (Splintered #2)
Author: A.G.Howard
Release Date: January 7th, 2014
Publisher: Amulet Books
Genre: YA/Fantasy
Series: Book 2 in Splintered series (My review of Splintered is here)
Book Link: Goodreads
Purchase Links: Amazon, Barnes & Noble, Book Depository
Synopsis from Goodreads:
Alyssa Gardner has been down the rabbit hole and faced the bandersnatch. She saved the life of Jeb, the guy she loves, and escaped the machinations of the disturbingly seductive Morpheus and the vindictive Queen Red. Now all she has to do is graduate high school and make it through prom so she can attend the prestigious art school in London she’s always dreamed of.That would be easier without her mother, freshly released from an asylum, acting overly protective and suspicious. And it would be much simpler if the mysterious Morpheus didn’t show up for school one day to tempt her with another dangerous quest in the dark, challenging Wonderland—where she (partly) belongs.As prom and graduation creep closer, Alyssa juggles Morpheus’s unsettling presence in her real world with trying to tell Jeb the truth about a past he’s forgotten. Glimpses of Wonderland start to bleed through her art and into her world in very disturbing ways, and Morpheus warns that Queen Red won’t be far behind.If Alyssa stays in the human realm, she could endanger Jeb, her parents, and everyone she loves. But if she steps through the rabbit hole again, she’ll face a deadly battle that could cost more than just her head.
Disclaimer: This book was a personal purchase.
Review:
Second book are notoriously weaker than the first books in a series. It’s similar to what is referred to as the “sophomore slump” in high school.In these second books,character development is weaker and the writing isn’t as pretty as it was in the first book. I found none of that to be the case in Unhinged. In fact I went as far as to say that Unhinged was better than Splintered and I honestly didn’t believe that was possible.
While Splintered had the “newness” of a series which resulted in a lot of character building, getting to know a lot of different characters and scene setting, Unhinged had the expansion on the characters. We got to know a lot more about not only those who live in Wonderland but also about those who lived in the human realm with Alyssa.
The writing was, once again, absolutely stunning. I mean, wow it was vivid and descriptive. It made me feel like I was actually in the book. Very few books are able to achieve that level of vivid imagery. Making the reader feel like they are in the book is a special talent that not every author has. A.G. Howard definitely does.
I felt sort of like Alyssa throughout the book. It felt like Morpheus and Jeb were playing tug-of-war with Alyssa and by extension, me. Morpheus was exasperating and sometimes I wanted to chain him up and leave him there. But sometimes I wanted him to be all mine.I think Morpheus has more secrets than we know right now and I can only hope that the final book will give us answers about him.
Oh Jeb,I did like him in this book, even though his art appeared to be more important to him than Alyssa was. I almost wonder if Alyssa feels like she has to be in love with him since they’ve been friends forever. Do I think she cares for him? Absolutely but I’m not buying a ticket to Love-Land quite yet. Jeb clearly would do anything for her. I definitely think that he is in love with her, but like I said, I’m not sure it’s mutual…yet.
I refuse to spoil this book for those of you who haven’t read it but holy family history Batman. I definitely loved all the bits with Alyssa’s family. Particularly her mom now that she’s out of the asylum. Alyssa’s mom can definitely provide Alyssa with answers to her many questions. Problem is, will Alyssa believe that her mom is strong enough to handle it?
There is definitely more than meets the eye with this book. This book caries within in many secrets. Secrets that may strengthen Alyssa and her family or weaken it. We just don’t know yet. This book was amazing and I cannot believe that we have to wait until 2015 for the conclusion to this series. I honestly don’t know how I am going to manage the wait. If I could give this book more than 5 stars, I would.