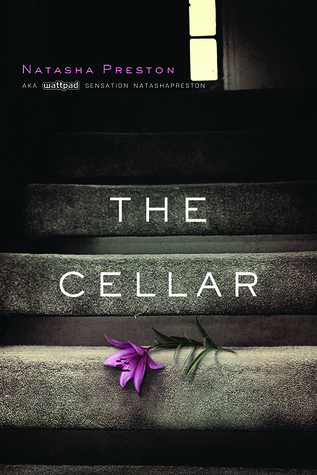 Book Title: The Cellar
Author: Natasha Preston
Published Date: March 1st, 2014
Publisher: Sourcebooks Fire
Genre: YA Contemporary
Series: Book One in The Cellar duology
Book Link: Goodreads
Purchase Links: Amazon, Barnes & Noble, The Book Depository
Synopsis from Goodreads:
Nothing ever happens in the town of Long Thorpe – that is, until sixteen-year-old Summer Robinson disappears without a trace. No family or police investigation can track her down. Spending months inside the cellar of her kidnapper with several other girls, Summer learns of Colin’s abusive past, and his thoughts of his victims being his family…his perfect, pure flowers. But flowers can’t survive long cut off from the sun, and time is running out….
Disclaimer: Library book.
Review:
I was sure I’d love this book. It looked like it was straight out of a script from Law and Order: SVU. I looove crime shows, always have.  So I was excited about this book from the start. Plus the cover was perfect.
Unfortunately this book bored the heck out of me. I couldn’t get into it. I normally love the creepy books, but this psychopath was anything but exciting and interesting. In fact his supposed reasons for murder, rape & kidnapping were so overdone, I was bored. He did all this crappy stuff to protect women from the dangers of the real world. He wanted to keep girls pure, and that’s why he kept girls in his cellar, and named them after flowers.
His mom had been cheated on, and so Clover/Colin, whatever the hell he was called, felt the need to murder the “other women” His mother loved flowers so that was another reason why he named them Lily, Violet, Rose & Poppy. He considered them “his family” His perfect, pure and whole family. It didn’t matter to him that Summer/Lily came from a loving family. What mattered was that she was “allowed” to walk alone in the dark at night.
Summer herself was exasperating. I could not understand why she thought it was a good idea to walk alone in the dark. I was pissed at her boyfriend for not insisting that he come with her. Of course I’m not blaming her for what happened to her, and I’m also not blaming Lewis, her boyfriend.
The pacing was very jerky. Sometimes it would be intense and mildly fascinating, and other times it was boring and uninteresting. I wasn’t excited about picking it up, and in fact I got really excited when I got to put it down. The editing was pretty crappy, and if I had to see one more exclamation point, I was going to scream. The author used an abundance of them, usually when it was completely pointless.
I was hoping for a creepy, bone chilling, thrilling ride. What I got was a predictable story with unlikeable characters and a jerky plot. I’ll be giving this book 2 stars, and I will not be reading the next book. I would not recommend this book to anyone.