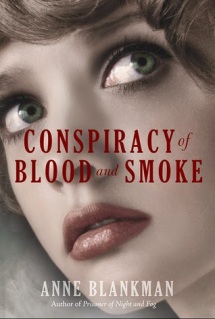 Book Title: Conspiracy of Blood and Smoke
Author: Anne Blankman
Published Date: April 21st, 2015
Publisher: Balzer + Bray
Genre: YA Historical
Series: Book Two in Prisoner of Night and Fog series
Book Link: Goodreads
Pre-Order Links: Amazon, Barnes & Noble, The Book Depository
Synopsis from Goodreads:
The girl known as Gretchen Whitestone has a secret: She used to be part of Adolf Hitler’s inner circle. More than a year after she made an enemy of her old family friend and fled Munich, she lives with a kindly English family, posing as an ordinary German immigrant, and is preparing to graduate from high school. Her love, Daniel Cohen, is a reporter in town. For the first time in her life, Gretchen is content.But then, Daniel gets a telegram that sends him back to Germany, and Gretchen’s world turns upside-down. And when she receives word that Daniel is wanted for murder, she has to face the danger she thought she’d escaped-and return to her homeland.Gretchen must do everything she can to avoid capture and recognition, even though saving Daniel will mean consorting with her former friends, the Nazi elite. And as they work to clear Daniel’s name, Gretchen and Daniel discover a deadly conspiracy stretching from the slums of Berlin to the Reichstag itself. Can they dig up the explosive truth and get out in time-or will Hitler discover them first?

Disclaimer: I received this e-ARC from Balzer + Bray via Edelweiss in exchange for my honest review.

Review:
I was worried that this book wouldn’t deliver as amazingly as the first one did. I had loved the first book so much and I think I had Conspiracy of Blood and Smoke up on a pedestal. While Conspiracy of Blood and Smoke wasn’t as amazing as its predecessor, I still enjoyed it a lot. Blankman has this ability to weave a tale with gorgeous writing and filled with characters that people will love.

Gretchen and Daniel have been able to live a different life for the past seventeen months. Gretchen has been living with the Whitestone family, and she’s found love, acceptance and kindness with them. They know her story, they know Daniel’s story and they support their relationship.

Everything changes when Daniel is accused of murder. Suddenly Gretchen and Daniel’s quiet life is turned upside down. Now they must find out who actually killed Fraulein Junger and why they framed Daniel for it. Gretchen suspects Hitler and his cronies, but finding out the truth will test her and Daniel’s relationship in ways that neither of them ever expected.

The first half of the book was a bit difficult for me to get into, despite the storytelling and the lush descriptions being so fabulous. I was happy to be back in this fascinating world, but for some reason it took me awhile to fall back in love with this story. By the time the second half of the book began, I was falling back in love with it. The second half seemed much stronger than the first half, and I think it’s because more stuff was going on.

I still absolutely adore Gretchen and Daniel. They were my favorite bookish couple in 2014 and as of right now they are in contention for my favorite bookish couple of 2015 as well. Their strength as a couple improved as did their individual stories. We actually got more of Daniel’s story in this book, which really excited me. In Prisoner of Night and Fog, we didn’t get as much of Daniel’s story as much as I wanted.

I did enjoy this book a lot, but I didn’t love it as much as I loved the first book. I do recommend this boo to anyone who is fascinated by the Hitler era like I am. I am giving this book 4 stars, and I will read anything Blankman writes. She’s got a flair for vivid storytelling and complicated and interesting characters. 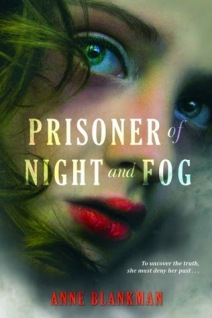