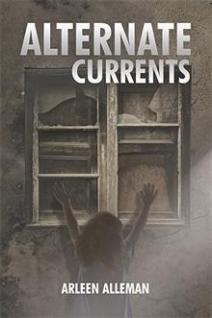 Book: Alternate Currents
Author: Arleen Alleman
Published Date: July 5th, 2013
Published by: Xlibris Corporation
Genre: Mystery/Contemporary
Series: Book 4 in the Darcy Farthing series
Book Link: Goodreads
Purchase Links: Amazon, Barnes & Noble
Synopsis (from Barnes & Noble):
This fourth novel in the Darcy Farthing series continues to explore themes of love and tolerance in the midst of crime and prejudice. Author Darcy Farthing is living in DC with her fiancée, Mick Clayton, enjoying a much needed respite. As they prepare for a wedding and a romantic cruise, they find out that a good friend, Charlie Scott, has mysteriously disappeared. Against Mick’s wishes and without much thought of consequences, Darcy flies to Seattle to help Charlie’s partner, Don Freeburg, and daughter, Penelope, cope with their loss. She finds that a prior well-intentioned decision about parenthood has sparked a series of tragic events, which threaten to destroy a parent-child bond. Eager to help, Darcy plummets into the unfamiliar world of same-sex partnerships, surrogates, and assisted reproductive technology.
While the police and FBI are still trying to solve Charlie’s kidnapping, Penelope also vanishes. Detectives implicate a local clergyman, a birth-mother, and a radical author, but can find no proof of guilt. When Darcy tries to apply her investigative skills to the baffling case she sustains a vicious attack by an unbalanced killer. Mick rushes to her side and as the mystery is finally solved he also becomes a victim of vengeance and madness.:
Disclaimer: I received this book from the author in exchange for my honest review.
Review:
Within the first 50 or so pages,I was tempted to throw this book across the room. Not because it wasn’t good but because the ultra-conservative pastor and his deplorable feelings on gay people. I was angry and rage-y. I was livid at the words I was reading on the page. I rarely get this rage-y while reading but I couldn’t understand how this author managed to write such an asshole character. That was in addition to Darcy’s fiancee Mick. Yet another homophobic character. Yes he did eventually become more accepting but my initial feeling about him was definitely not positive.
Anywho, I loved both Don and Charlie. They were not the stereotypical gay couple which was great to see.Plus they clearly loved each other and their sweet little girl Penelope.When things went bad,they stayed supportive of each other and didn’t allow the mystery surrounding Penelope’s parentage to push them apart.Even when Penelope was abducted and the days with no answer as to her whereabouts went on,they stayed committed to each other.
Darcy and Deanna were two awesome ladies who seemed to both kick ass and take names while doing it. I loved watching the friendship develop between them and how they both supported Don & Charlie through this whole thing.
I knew that there was more to the whole surrogacy issue than met the eye. It was clear to me that Andrea had scammed a couple desperate to have a family. It was also clear that Charlie and Don had put far too much trust in both Andrea and the lawyer handling the case. I knew that the pastor was definitely involved somehow.Every single word that came out of his mouth just made me angry.
Of course I can’t leave out Leslie Lavender who was crazy about Don or just crazy in general. To the point that he was stalking him and making plans to get rid of Charlie & Penelope so that he and Don could be together. Never mind that Don had already shot him down repeatedly.
I’m giving this book 4 stars. I would love to give this book 5 stars because it was an enjoyable mystery overall. However I just cannot get past what bigotry and hatred the pastor had spewed about gay people.I’m a little annoyed that this character was in this book because if the pastor had not been in the book,I probably could have overlooked both Mick & Leslie Lavender and their abhorrent behavior.