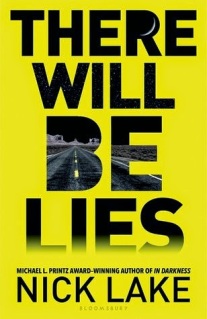 In four hours, Shelby Jane Cooper will be struck by a car.Shortly after, she and her mother will leave the hospital and set out on a winding journey toward the Grand Canyon.All Shelby knows is that they’re running from dangers only her mother understands. And the further they travel, the more Shelby questions everything about her past—and her current reality. Forced to take advantage of the kindness of unsuspecting travelers, Shelby grapples with what’s real, what isn’t, and who she can trust . . . if anybody.Award-winning author Nick Lake proves his skills as a master storyteller in this heart-pounding new novel. This emotionally charged thrill ride leads to a shocking ending that will have readers flipping back to the beginning.

Disclaimer: I received this ARC from Bloomsbury Children’s in exchange for my honest review.

Review:
I really was massively excited about this book. I absolutely love mysteries and have read some really awesome ones lately. I hadn’t read anything by Nick Lake before so I was nervous, I really wanted to enjoy this book as the premise sounded so fascinating.

Unfortunately the book really let me down and I struggled every single day with picking it up. No one wants to struggle to read a book, so the fact that I was doing it made me miserable. There were various reasons that this one didn’t work for me, but I’m just gonna highlight a few of them.

Firstly, and more importantly, I felt like I was reading two separate books. The mythology of Coyote and the trickster gods didn’t interest me at all and I flipped through those parts. I was more interested in Shelby and her mom. I think if the mythology bits had been woven into the story more effectively, I would have been able to enjoy it more. The sections about Shelby and her mom were far more interesting and I found myself devouring those parts. I was invested in Shelby’s story, but I was not invested at all in the mythology bits.

My second issue is connected to the first issue. It’s about the pacing. Pacing can be a really big deal to me depending on how the rest of the book is going. Sometimes it can save a book, sometimes it can sink a book. The pacing in this book was very choppy and I think that was due to the constant shift from Shelby’s story to the mythology bits. The bits with Shelby and her mom were fascinating and paced well, while the bits with the mythology made me sleepy and bored.

The editing. It didn’t hit me until I was about 30 pages into the book that there were no quotation marks. None. Apparently we were supposed to just know that having italicized text meant someone was talking. I was extremely frustrated by that. It seemed very lazy to be totally honest, which is another thing that I didn’t enjoy about the book.

I really liked Shelby as a narrator. She was interesting and I actually cared about her and what happened to her. Could her character been developed better? Hell yes. However, she was still the strongest part of the book for me. Having her be deaf was extremely fascinating to me as I had never read a book with a deaf narrator before, so that aspect was very interesting to me.

Overall, this book did not work for me. I am really bummed about that, but no one is going to love every book. I did like Shelby as a narrator, but she was not enough to save the book for me. I am going to give this book 2 stars. It had a great premise, but it was not executed well.