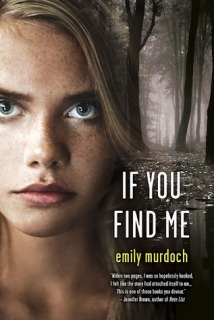 Book Title: If You Find Me
Author: Emily Murdoch
Published Date: March 26th
Publisher: St. Martin’s Griffin
Genre: YA
Standalone
Book Link: Goodreads
Purchase Links: Amazon, Barnes & Noble
Synopsis from Goodreads:
There are some things you can’t leave behind…
A broken-down camper hidden deep in a national forest is the only home fifteen year-old Carey can remember. The trees keep guard over her threadbare existence, with the one bright spot being Carey’s younger sister, Jenessa, who depends on Carey for her very survival. All they have is each other, as their mentally ill mother comes and goes with greater frequency. Until that one fateful day their mother disappears for good, and two strangers arrive. Suddenly, the girls are taken from the woods and thrust into a bright and perplexing new world of high school, clothes and boys.Now, Carey must face the truth of why her mother abducted her ten years ago, while haunted by a past that won’t let her go… a dark past that hides many a secret, including the reason Jenessa hasn’t spoken a word in over a year. Carey knows she must keep her sister close, and her secrets even closer, or risk watching her new life come crashing down.
Disclaimer: This book was purchased by me.
Review:
Oh wow…
I’m not even sure that I can spit out in coherent sentences how amazing this book really was. It’s rare that a book can leave me totally speechless but this one rendered me speechless for a good hour or so after I finished the book.
Not only was I speechless but I had tears rolling down my face during the majority of it. This book really brought out those all important feels and I’m getting choked up again as I try to write a decent review for this book.
The idea of being told so many things and then eventually finding out that most of the things your troubled mama told you were lies. That is just heartbreaking to me. Carey and Jenessa “Nessa” both showed how incredibly strong they were. Carey needed to step up and be the mom that Nessa needed since their own mom had her own issues with mental illness and drugs.
Suddenly they are forced to live with Carey’s father and stepmother and stepsister even though they had been frequently told that Carey’s father Charlie was a bad man and that they had to stay away from him.It wasn’t explored in the book much but I have a feeling that Carey wondered a lot about her dad despite the lies her mother had told her.It’s only natural to wonder about someone you haven’t seen in a decade.
I loved Melissa, she was exactly the kind of woman that Carey and Nessa needed in their lives and I am so glad that she was such an important part of their girls’ new life. I was focused so much on Carey and Nessa’s story that it wasn’t until the end that I really started thinking about Delaney and how she was feeling about all this. Like Melissa told Carey,it was an adjustment for all of them, Delaney included.I think Delaney struggled with the abrupt changes in her own life with her mom and stepdad.
Ryan and Pixie were totally awesome people. Ryan’s connection to Carey and to her mom Joelle was heartbreaking and the few times it was brought up, I only cried harder.In my head Ryan is the guy who Carey gives herself to. Not because she has to but because she wants to.
This is the kind of book that really makes me so grateful for the people in my life.Especially the people who are constantly and consistently in my life. I don’t know what I would do without them.I absolutely adored this book and it gets an easy five stars from me. I couldn’t imagine this book being any more wonderful.