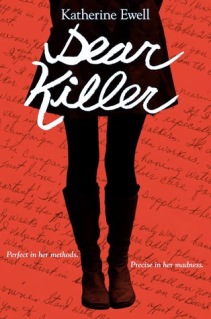 Book Title: Dear Killer
Author: Katherine Ewell
Release Date: April 1st, 2014
Publisher: Katherine Tegen Books
Genre: YA/Mystery
Standalone
Book Link: Goodreads
Pre-Order Links: Amazon, Barnes & Noble, The Book Depository
Synopsis from Goodreads:
Rule One—Nothing is right, nothing is wrong.Rule Two—Be careful.Rule Three—Fight using your legs whenever possible, because they’re the strongest part of your body. Your arms are the weakest.Rule Four—Hit to kill. The first blow should be the last, if at all possible.Rule Five—The letters are the law.Kit takes her role as London’s notorious “Perfect Killer” seriously. The letters and cash that come to her via a secret mailbox are not a game; choosing who to kill is not an impulse decision. Every letter she receives begins with “Dear Killer,” and every time Kit murders, she leaves a letter with the dead body. Her moral nihilism and thus her murders are a way of life—the only way of life she has ever known.But when a letter appears in the mailbox that will have the power to topple Kit’s convictions as perfectly as she commits her murders, she must make a decision: follow the only rules she has ever known, or challenge Rule One, and go from there.Katherine Ewell’s Dear Killer is a sinister psychological thriller that explores the thin line between good and evil, and the messiness of that inevitable moment when life contradicts everything you believe.
Disclaimer: I received an e-ARC of this book from Katherine Tegen books via Edelweiss in exchange for my honest review.
Disclaimer 2: This review contains spoilers. Proceed at your own risk.

Review:
Okay there are a few things I need to say before I really get into the review for this book. One, this book is not for everyone. Some people will enjoy it and some people won’t. Secondly, you really need to suspend reality to enjoy this book. To most people, murder is not okay, but in this book, in this world, it’s all Kit knows.
As a child, Kit’s mother raised her to be a ruthless killer and to take over her mom’s reign as Dear Killer when she is ready. Kit has managed to keep the terror of Dear Killer alive. Her destiny has been settled since she was a small child. Her mom believes that the only way to deal with the crappy things that happen in the world is by asserting justice on their own.
She doesn’t kill everyone who sends her letters, she chooses her victims carefully from the letters that she receives. Yet things start to change when she receives a letter demanding that she kill a fellow high school student. Against her better judgement, Kit develops a friendship with Maggie even though that violates an unspoken rule to not get close to the victims.
Kit mostly sticks to herself so she won’t violate the unspoken rule. Yet Maggie sneaks into her seemingly cold heart and that makes it difficult for Kit to imagine actually killing her. Yet the idea of going against everything her mom has taught her, is difficult. So now Kit has to decide what is more important, her long held beliefs, drilled into her by her mother or her growing realization that she wants more for herself. She wants to be held accountable for her actions.
Kit’s home life is pretty crappy. Her mom deliberately married a man who is very emotionally and physically distant with her and Kit. He is very into his work and not really concerned about his wife and kids. One could call that convenient which of course is not a good thing, but then again I had to suspend reality for this book. Her mom didn’t want anyone in the family to question what she was doing. Yet she and her mom are very close. They talk about everything which is really nice to see as that kind of relationship is underrepresented in YA.
There were some lulls at about 70% into the book and the character development wasn’t as strong as I was hoping that it would be. It was an interesting concept that overall I enjoyed. I am going to give it 4 stars because I did enjoy the book overall.I can definitely understand why some people had problems with it, but I really enjoyed it and was glad to read something completely different than anything I had ever read before. I would recommend it mostly because it was such a unique read that I am really glad I took a chance on.