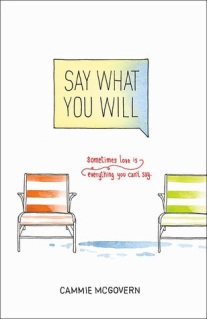 Book Title: Say Whay You Will
Author: Cammie McGovern
Release Date: June 3rd, 2014
Publisher: HarperTeen
Genre: YA/Contemporary
Standalone
Book Link: Goodreads
Purchase Links: Amazon, Barnes & Noble, Book Depository
Synopsis from Goodreads:
John Green’s The Fault in Our Stars meets Rainbow Rowell’s Eleanor & Park in this beautifully written, incredibly honest, and emotionally poignant novel. Cammie McGovern’s insightful young adult debut is a heartfelt and heartbreaking story about how we can all feel lost until we find someone who loves us because of our faults, not in spite of them.Born with cerebral palsy, Amy can’t walk without a walker, talk without a voice box, or even fully control her facial expressions. Plagued by obsessive-compulsive disorder, Matthew is consumed with repeated thoughts, neurotic rituals, and crippling fear. Both in desperate need of someone to help them reach out to the world, Amy and Matthew are more alike than either ever realized.When Amy decides to hire student aides to help her in her senior year at Coral Hills High School, these two teens are thrust into each other’s lives. As they begin to spend time with each other, what started as a blossoming friendship eventually grows into something neither expected.
Disclaimer: I received this book from HarperTeen via Edelweiss in exchange for my honest review.
Review:
I will admit that I was insanely excited about this book. I mean cerebral palsy is so completely rare in books and yet many people have to deal with it in real life.Cerebral Palsy comes in different levels of severity but it is still massively under represented in books.OCD is more common in books, but this is the first book that I know of that combines both of these things.
I really don’t want to get preachy but people with disabilities want the same thing as non-disabled people want. They want to be accepted for who they are as a person.That’s the journey that Amy finds herself on in this book.She starts off under her parents roof, coddled and protected to the hilt. Especially by her mother. Nicole feels it necessary to coddle the heck out of Amy even going as far as to interview “friends” for Amy.
I have had my own share of health problems. Not as severe as Amy’s but I use a wheelchair for long distances and being disabled in a “visual way” does make you feel so lonely. People seem to shy away from you and friendships are hard to form & keep.I cannot imagine being nonverbal & unable to use your voice to communicate your thoughts. I was a part of a disabled kids & teens group about 15 years ago and I knew someone who was a lot like Amy.
Matthew’s journey was in some ways, more special than Amy’s. Amy was battling not only her mother, but also her own body and her dream of independence. Matthew was battling himself. OCD can also be very hard to deal with. I have OCD, but in a much milder form than Matthew dealt with.
I love the little tasks that Amy set for him. She wanted him to get better and to overcome the OCD since she would never be able to do the same with her disability. Matthew found himself wanting to do it because of Amy and how they had developed a friendship. A friendship that is threatened by Amy’s own mother who is clearly afraid that if Amy becomes more independent, she will no longer be needed.
About halfway through this book, I was genuinely conflicted on how I felt about it. But by the end of it, I realized how beautiful it was and how each of the characters, main and secondary had gone through their own journeys. I would absolutely recommend this book. It gets four stars mostly because it took awhile for me to really get into it but once I did, I couldn’t put it down.